After a period of frost, especially on April 6&7th, we had a humid June month and the flowering was done only around June 20th.

In July, the temperatures were normal but we had a steady period of rain and humidity and the sickness pressure was very strong till the beginning of August.

We finally started our harvest on September 20th and without surprise we did 50% less in general due to our April frost. The bigger lost was in our Ier Cru Vaillon, Grand Cru Valmur and Vaudésir. Les Clos and 2 parcels of Vaillon were not too bad, thanks to our frost protection who did their job !

The 2021 are fermenting nicely and already delivering some nice aromas, but we got to be patient with it.

At the moment we are starting to bottle some 2020 Chablis, Ier Cru Vaillon and a small amount of Les Clos, The rest of our Grand Cru will be bottled next February 2022.

The 2021 in our opinion is absolutely superb and will be enjoyable young and after a few years for the Grand Cru . 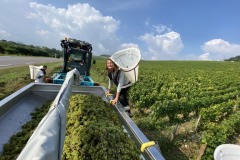 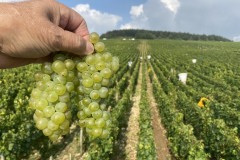 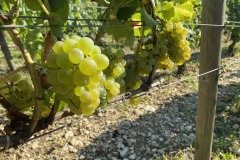 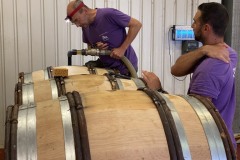 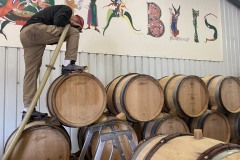 After a cold and humid winter, black frosts hit us for several nights in April (6th, 7th, 12th and 14th) and in early May.
Damage was done mostly during the first two nights in April, especially the 7th, as we had rain and even snow in certain areas.
Our parcels with frost protection (5ha in total: Les Clos, Clos des Hospices and 1.5ha of Vaillon) seem to have survived so far. But the other 7ha are burned from 50 to 80%.
The most affected areas with nearly 100% of loss are Valmur, 3ha of Vaillon, Petit Chablis and our parcel of Chablis Les Pargues.

Now temperatures are still very cool and it continues to rain a lot so the vines have trouble growing. We would need a warm up to see second buds coming out and really be able to assess the damage in the vineyard. We still have quite a long way to harvest!

In the cellar, we are selling our 2019 and we will start bottling some Chablis and Vaillon 2020 beginning of June. The quality of our 2020 gives us entire satisfaction!

Despite the Covid-19 pandemic, business starts to move again around the world where restaurants are re opening. In France the situation is also starting to improve so let’s be positive!!